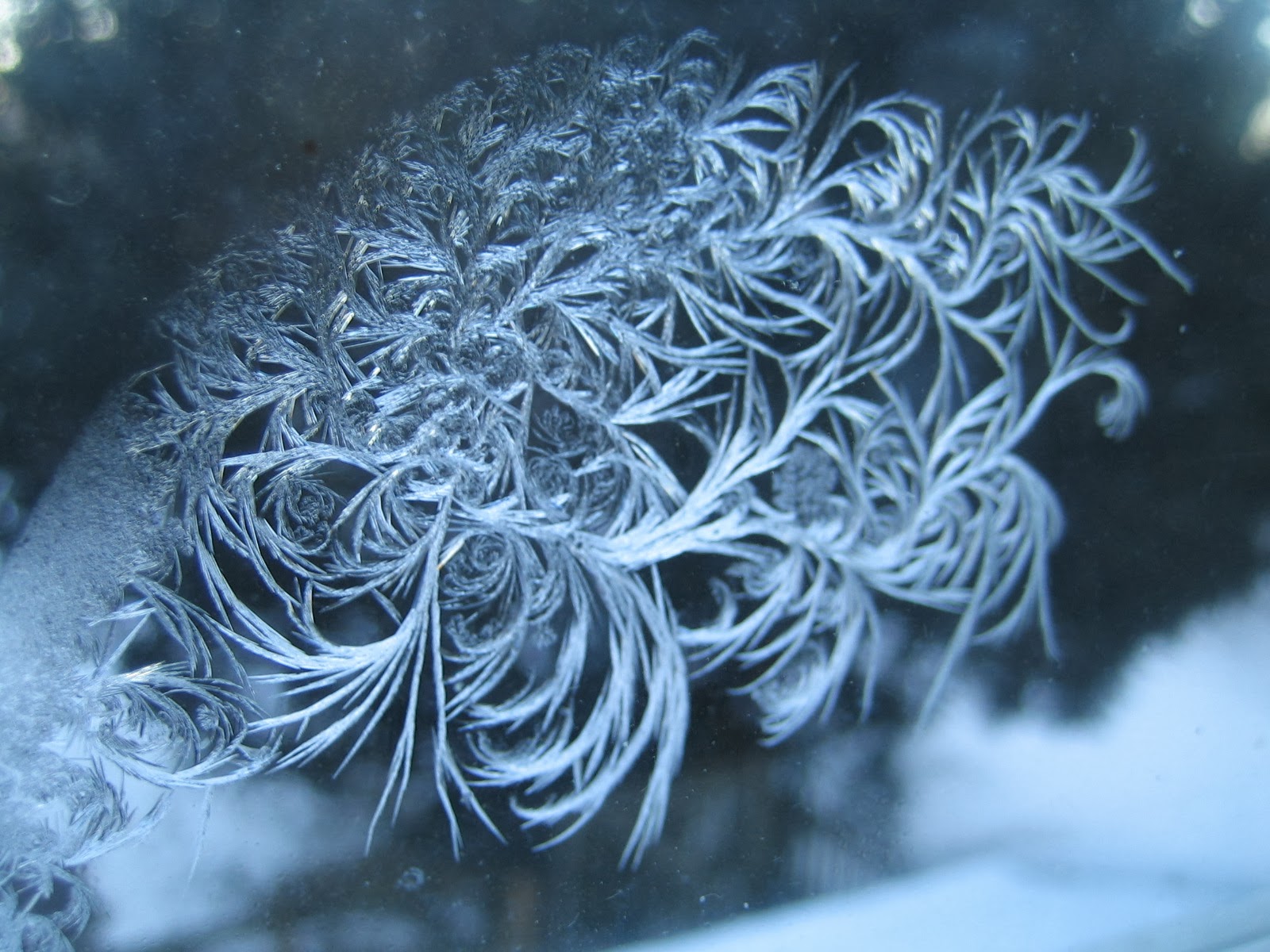 A 3-inch wide frost swirl on my living room window.
Posted by Shulammite at 4:46 AM 2 comments:

Respectfully submitted for your perusal:  Another tale of Elaine’s misadventures with rodents (in bed).

1 a.m.: I was awakened by clattering sounds in the kitchen.  When I got up to investigate, I found the cat crouched attentively on the floor, carefully watching the area around the washing machine.  “I’ll leave you to it,” I said, and returned to sleep.

2 a.m.: I was again awakened when the cat launched herself off my bed and ran into the kitchen.  I smiled into my pillow.  It was the coldest night of the year and at that moment I was acutely aware of the great pleasure of feeling cozy and snug in my flannel sheets, ready to drop off again into a pleasant, restful sleep.  I dozed.

A few minutes later I was alarmed into wakefulness by the irregular cadence of the cat’s pitter-patter.  In an instant, my bedside light was on, and I was perched in an alert kneeling position in the center of the bed, squinting into the sudden, offensive light.  She had caught her first mouse, and being a young, well-fed feline, she was deferring its slaughter until she’d had her fun pummeling it, releasing it, chasing it and recapturing it.  I’d been through this before with other cats and knew I was in for a long ordeal.  I wondered whether I could try to sleep through it and wait till morning to find out the outcome.

Up to this point, I had still not seen the mouse.  I only followed its path by watching the cat’s.  After a while – a few instants, really – it appeared that the mouse had come out from under my bed and managed to crawl up a leg of my dresser to a small outcropping about five inches from the floor.  Without my glasses, and in the poor light, I could barely make out a grey form being playfully batted by the young cat.  The cat even turned luxuriously on her back as if she were playing an affectionate game with a treasured friend.  I watched as the mouse made circles around its little post, silently enduring the light taps from the cat’s paw and the curious sniffs from her nose.

This phase of the game lasted only a few moments.  I watched nervously as the cat slithered under my bed again.  With horror, I realized she had now cornered the mouse under my exercise machine at the foot of my bed.  The mouse could find refuge under the complex twistings and turnings of that machine, giving the cat hours of a huntress’s cruel pleasure of the chase.  Or worse.  The mouse could use the machine as a ladder to get up to my bed.

Just as this thought entered my mind, the cat was perched at the foot of the bed, searching with great alertness the folds of my blankets.  In an instant I was barefoot in the kitchen, gazing in blurry horror (for, in my haste, I had not grabbed my glasses from the dresser), as the cat searched and poked and searched for the mouse among my blankets and in the crack between the mattress and the wall.  I felt the chill of the night seeping into my feet and arms, and I watched as the cat’s attention began to wane until she looked up at me from the only warm place in the apartment and apparently gave up her search.

She came over to me as if it were perfectly normal for me to be standing barefoot in my pajamas at three in the morning.   I nearly wept.   I was tired and cold and could not imagine how I could sleep again that night.  The living room chair was a poor substitute for the cozy bed, and the floor was not an option.  I realized I could not return to bed until one of three conditions was met:  1.) I saw and disposed of the mouse’s corpse, 2.) I personally inspected every square inch of blanket, mattress and bed frame until I was certain no mouse was there, or 3.) I witnessed with my own eyes the departure of the mouse from the apartment.

I was conscious at this point of the irony of extremes.  Just a few moments ago I was overcome with pleasure at the thought of the safety and warmth of my bed, and of the return of pleasant sleep.  Now, here I was, tightly rolling my pajamas up to my knees (to prevent the mouse from running up my pant-leg for refuge), tucking my hair into my collar, and arming myself with a long-handled dust mop; approaching the bed on a mission.

To my chagrin, the cat began batting at the handle of the dust mop with her paw, as if I’d taken it out to play with her.  With the end of the mop handle, I lifted a corner of the top blanket and flipped it in half.  When no mouse sputtered out in a frenzy, I took the blanket with my hand at arm’s length, gingerly lifted it, inspected it and gently shook it.  I carried it into the living room and draped it over the chair thinking I might be forced to use it to keep warm if I had to sleep the rest of the night there.

I then took hold of the bed frame – again, at arm’s length – and gave it a tug or two in order to open up some space for the cat to renew her efforts in finding the mouse in the space between the wall and the mattress.  She took the cue and in an instant was lazily seeking the mouse again.  She soon gave up, though, and my heart sank.

Approaching the bed again, I quickly lifted the tucked corner of the blankets closest to me and leapt back.  Nothing happened.  I approached the bed again and untucked the far corner, leaping back again.  When nothing happened that time, I approached the bed again – dust mop handle at the ready – and turned the blankets up toward the head of the bed.  At this point, the cat jumped excitedly back into the fray, and I swiftly retreated back into the living room.

Perched on the living room chair, peeking into the bedroom over the chair’s back, I watched in eager dread as the cat appeared to coax the mouse out from it’s hiding place onto the floor.  I braced myself for a long battle and prepared myself for my own running back and forth to avoid the fray.  The mouse seemed huge.  His white belly flashed as he jumped and evaded the cat under the exercise machine and, to my amazement and joy, he fled toward the one means of egress I knew of in the whole apartment:  a small gap under the door that leads out of my bedroom into the neighboring apartment.  My heart leapt into my throat as I watched – in slow motion, it seemed – the mouse slip into the little crack under the door.

For a split second I squatted on the chair, peering into the bedroom in dumb amazement, mouth open.  Then, reflexively, my arms shot up in a v-shape toward the skies as I whisper-shouted, “Thank you Father!”  My hands came down to cover my mouth as I laughed giddily, and I began hopping from one foot to the other in delighted glee.  Again, my hands went up to the ceiling and I repeated, “Thank you, thank you!”

The cat kept watch over the gap in the corner of the door as if the mouse might return for more play, but I knew better.  I confidently began to fold the blankets back over the bed and jumped back under the covers for what had become unexpected: cozy sleep at 3 a.m.

Just before getting back into bed, I got a photo of her vigil: 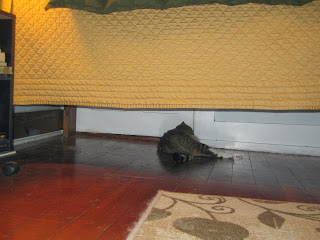 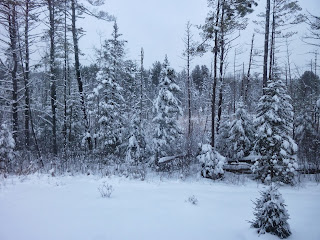