A train passed slowly by my house as I sat at my computer facing the train tracks.  As the last cars rolled past, I saw billowing smoke which I first thought was exhaust.  It struck me as strange that it would be coming from the rear cars, then I noticed a car pulled over and a guy on his phone pacing back and forth, and I realized the train wheels must have sent sparks into the brush beside the tracks.

Within just a few seconds, the winds picked up and the fire quadrupled in size and kept growing literally a stones throw (for an outfielder) from my window.  The police got here in no time, but the fire crews took a bit longer.  I'm told they planned to evacuate the neighbor's house, which you can see is not too far from the farthest char marks.  If the winds had been blowing in our direction, we risked seeing embers land in the dry underbrush of our yard.

They had it under control within an hour, and I watched them spray fire retardant foam and cut trees.  Crews returned periodically into the evening, and after dark they came in with a backhoe claw to retrieve what seemed like a lot of large timber.

I went out this morning to get these photos.  It looks much more dramatic in person. 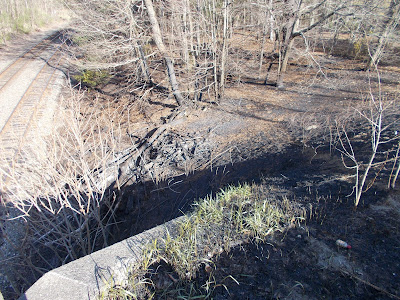 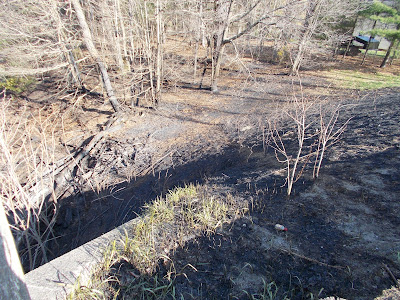 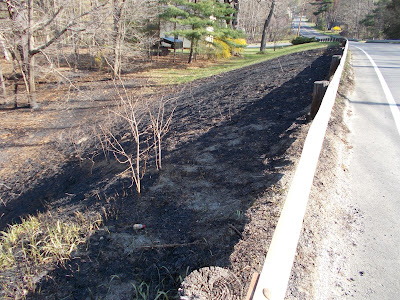 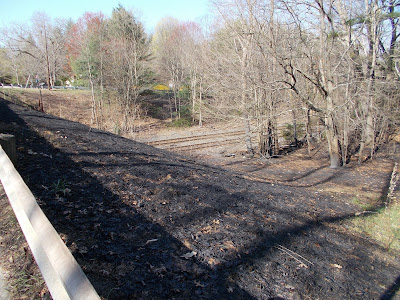 Posted by Shulammite at 7:19 AM No comments: