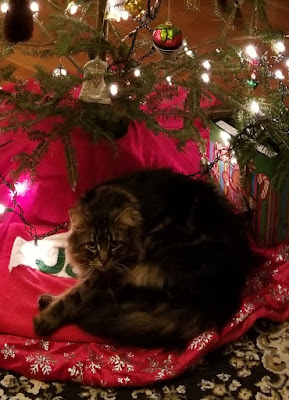 Good thing we did the raking ourselves this year (in October) instead of waiting for the contractor! Looks like we have a lot of small limbs down under the weight of the snow. Note the turkey in flight (second photo). 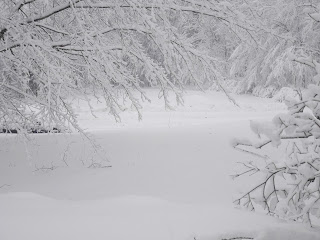 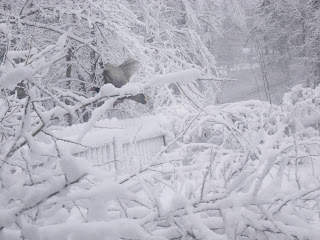 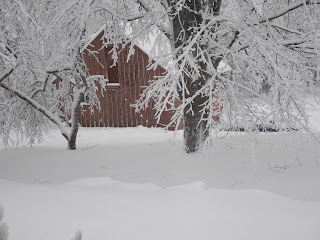 I decorated this tree for a museum fundraiser. Painted the peg people and made the foil decorations. Wrapped some wooden blocks in foil paper to put underneath as presents. Fashioned the bows out of fabric and red twine. About 80% of my experimental decorations failed, but it eventually came together into something. It's a bit messy, but it's ready in time for the deadline. Now, just have to deliver it without it falling apart! Happy Christmas season to all! 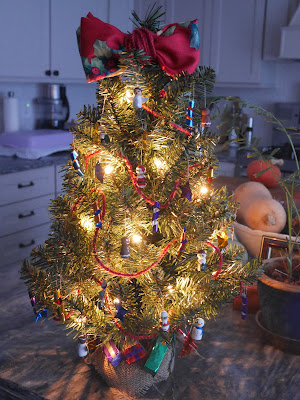 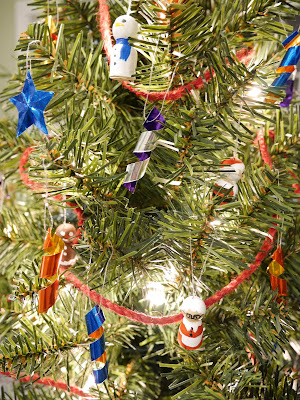 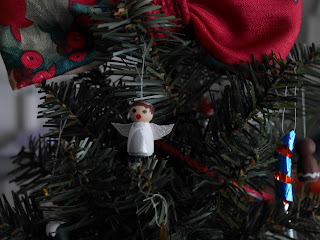 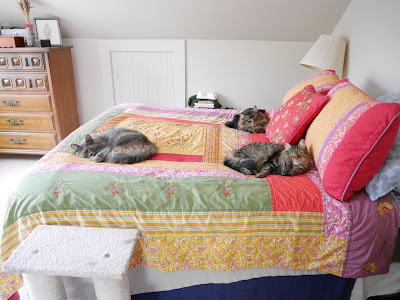 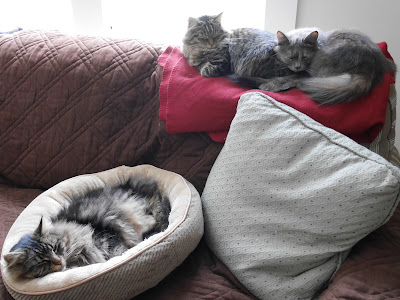 Late October--first observed kitty cuddle. Li Li took Minnie's spot, so Minnie just plop herself behind/on top of her. (Maybe not so much of a "cuddle" as a refusal to give in!)
Posted by Niki at 1:54 PM 4 comments: 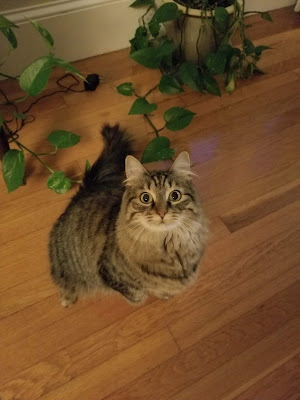 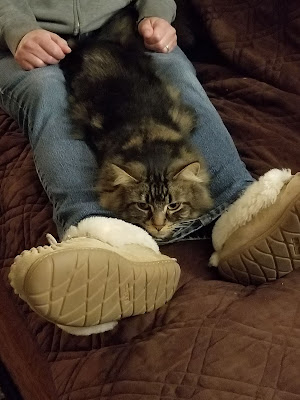 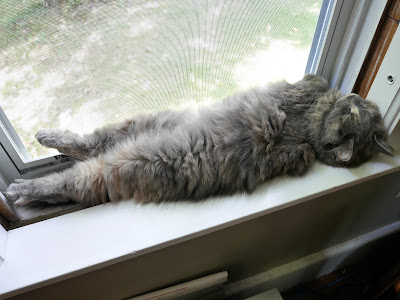 If it weren't for the photo on the top, we wouldn't have known he was still alive. It still took a week to catch him after we saw that photo. Bottom photo: safe and sound. He's become a very friendly/clingy cat, which overall is a nice change (he let me handle him to remove ticks!). However, he may be becoming a bit possessive of us. The two girls, who got along with him fine before, aren't all that pleased with his return. We're hoping the hissing will settle down soon. 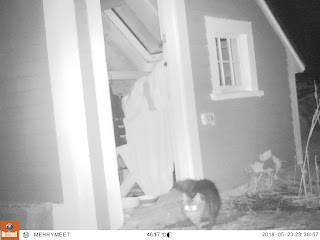 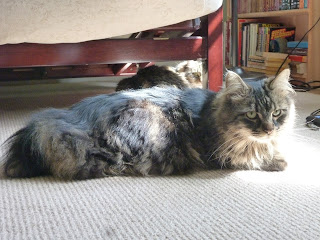 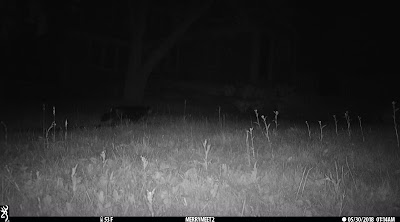 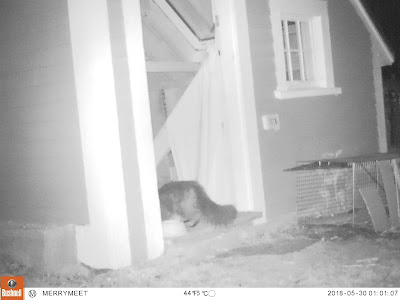 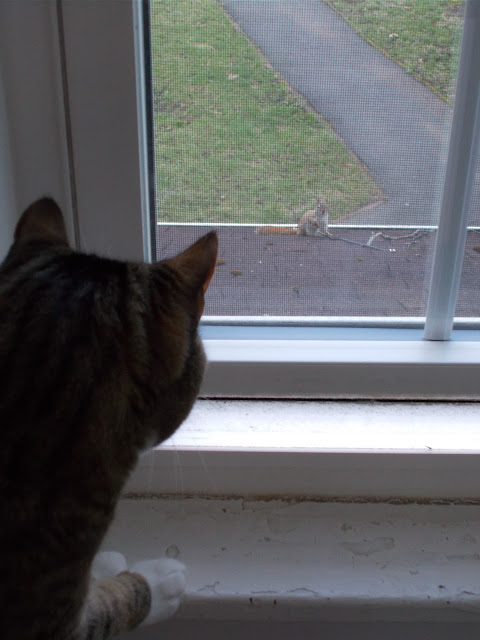 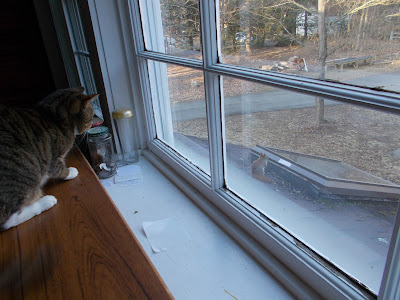 Brought Maggie for a ski today while Ezra was finishing up a pig-butchering/ salami-making weekend with the kids at a nearby farm. Might be our last ski for the season. It actually snowed pretty hard while we were out, which made the ski out softer and easier.
Happy dog.

Posted by Audrey at 4:16 PM No comments: 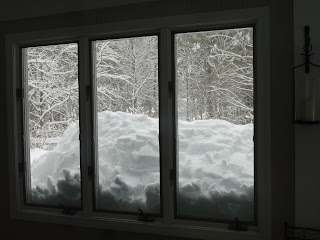 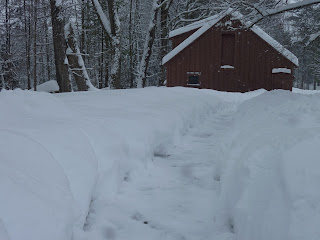 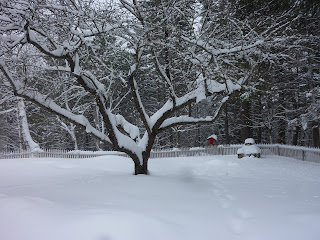 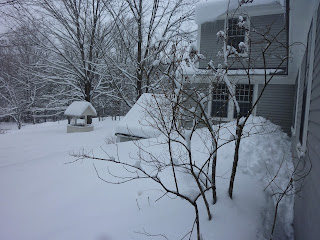 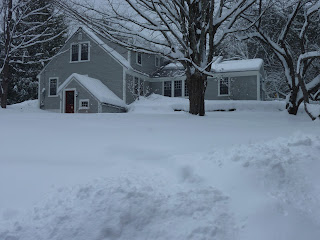 We’re enjoying winter while we’ve got it . Really nice snow conditions the last couple weeks made for some fun skiing. On Ezra’s birthday (over Presidents Day weekend), we skied to the historic Great Camp Santanoni— a 10-mile round trip.
Today, for Maggie’s third birthday, we skied into Marcy Dam (which was destroyed by Hurricane Irene and never rebuilt — a decision by the Department of Conservation. This out and back ski was about 6 miles. We did this trip years ago with Fred before Irene when Asa was a baby.

The Maggie-mobile helped lighten the load.

Maggie wanted that sandwich so badly. She got lots of treats for her birthday.

Posted by Audrey at 8:03 PM No comments: 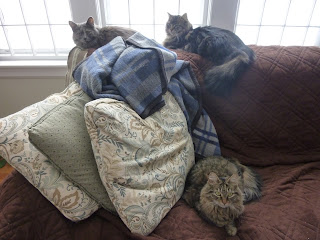 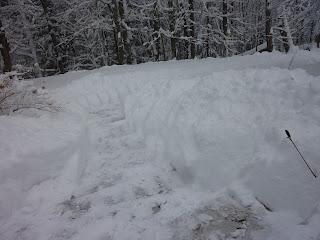 Testing out a new app for posting to this blog from my phone. Ida created a poster about Quebec for the elementary school multicultural fair. Asa made a poster about Jewish Poland.

It's a Jungle in Here


She's stalking me from between the chair and file cabinet. 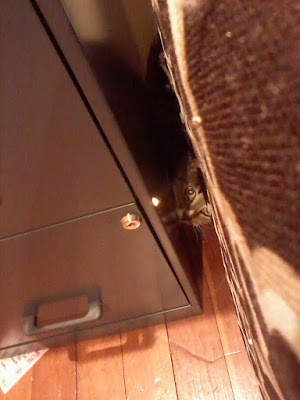 One is never safe in this house... 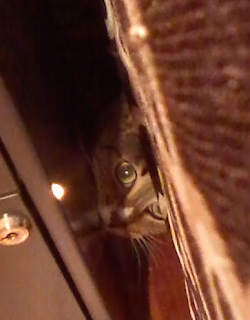 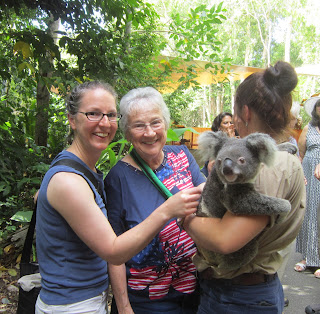