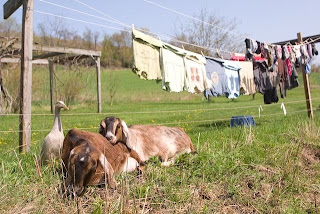 Couldn't resist posting a second image. They crack me up. And they're loving the sun and green grass.
Posted by Audrey at 6:30 AM 2 comments: 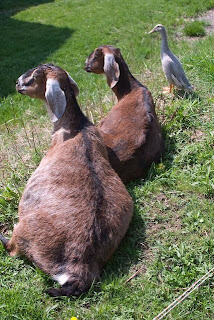 After being cooped up with Tulip and Chipper in the barn all winter, Duckie thinks he's a goat. He grazes when they graze, rests when they rest, sleeps with them, follows them wherever they go. Something to be said for companionship.
Posted by Audrey at 6:18 AM 2 comments: 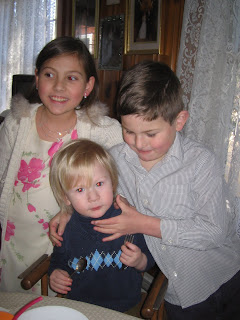 Thought you might like to see a recent photo of these three.
Posted by Niki at 4:17 PM 3 comments: 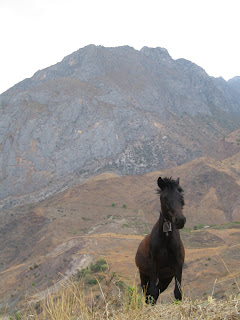 I helped my friend and her family plant about 4 acres of watermelon in their village. We had 10 people from the village helping, it took all day.

First, the handsome uncle plowed the fields. We followed behind him with rakes and leveled the ground, breaking up clods of dirt. 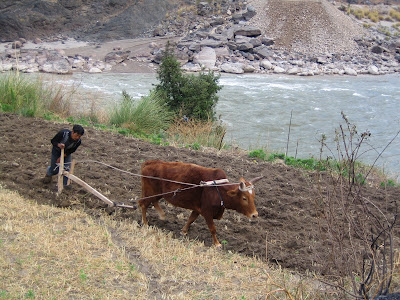 After we leveled the ground, my friend's father and another uncle plowed again, making rows. These rows were flattened with rakes so we could lay plastic. 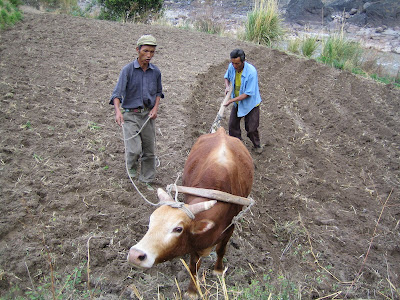 The plastic laying was pretty efficient. The plastic is thinner than a CVS bag, and I'm pretty sure it'll be torn to smithereens pretty soon. 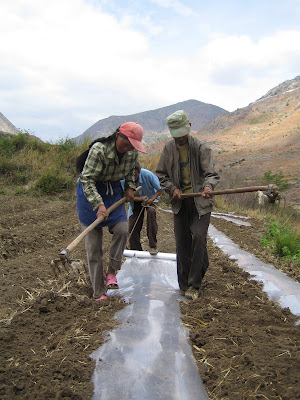 The kid was afraid of me, but he did a good job of helping here and there. (that's the Yangtse River in the back...) 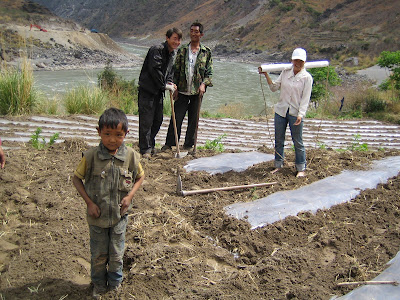 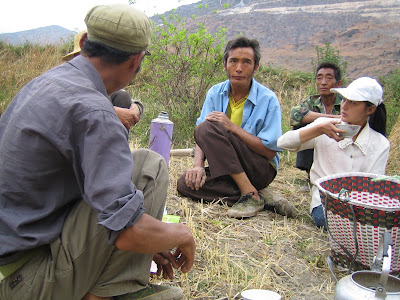 I took this picture, and shook my head at the guy to indicate it came out bad - butt in the foreground. He's skinny enough that the picture doesn't look that bad. He was the only man other than the father who would talk to me. I call him "the pot-smoking cousin," because the first time I met him he came by to visit the house I was at late in the evening. He and some other guy sat by the fire making jokes and laughing like they were high. He has no access to pot, but he is a cousin. 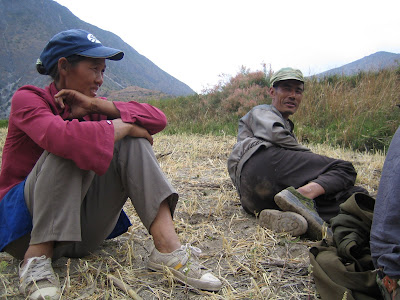 Does this look familiar? I got to punch holes for a while. But I slowed down, and they all laughed at me saying I was tired - which I was, but who cares - so the handsome uncle took over. 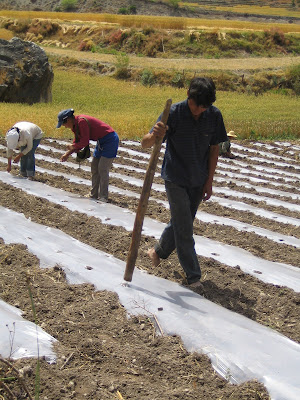 They planted 6 untreated seeds per hole, then covered the holes with 6 to 8 inches of dirt. 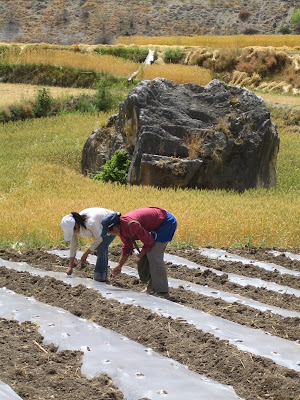 I kept telling them they didn't need to be planted so deep, but they just laughed at me. I kept muttering to myself, "This country is backward because you don't listen. I come from the most developed nation in the world, I have a degree in science, and I grew up on a farm. You keep digging in the dirt like monkeys, see how fast your country develops." (I was having a moment of frustration) In the end, I got them to test 2 small rows just covering the seeds an inch or two. My friend's father said that if my way works, they'll do it my way next year. One step at a time.

It felt good to do some work. And what a difference it made in my ability to build relationship with these people. Most of them didn't even speak Chinese, but they were much warmer to me after I spent the day working with them....
Posted by Shulammite at 8:00 PM 3 comments: 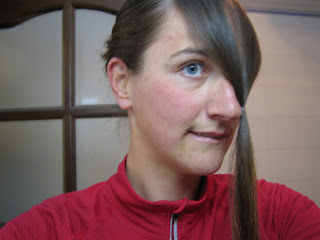 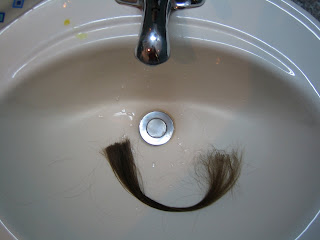 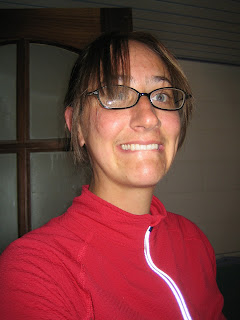 Wait a day and snip more 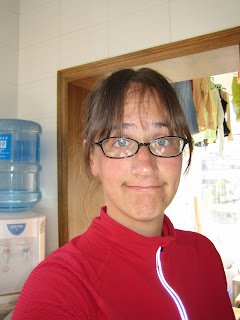 You've seen the haircut, now hear the song that inspired it!! (The video is lame, but the song is great.) You just need to listen to the words: Bangs, by They Might Be Giants

Some of my favorite lines:
**"Blow my mind Your Royal Flyness, I dig your bangs."
**"Bangs are like a pocket t-shirt,
as casual as that while fully intentional"
**"And although I like you anyway, check out your haircut.
a proscenium to stage a face that needs no make-up."

(I looked up proscenium: The stage of an ancient theater, located between the background and the orchestra.)

As a testament to the power of bangs, a story follows:

There's this local kid I've known for 2 years - he's a friend's cousin and moved to the city about the same time I did. The night of the bangs cutting, we were at a birthday party. I kept catching this kid staring at me. He kept telling people how great my bangs looked, or how great I looked with bangs. Later on, some other guy came over and introduced himself to me.

Bangs are that on which the world hangs...

And we'll close with a family snapshot, with new bangs... 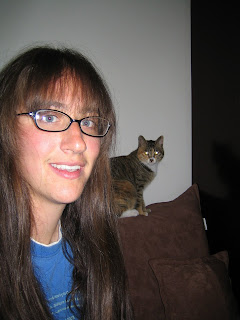